I’ve been in a bit of a reading slump. After reading YA Fantasy, I kind of drifted for a while and didn’t really read much. Luckily for me, I subscribe to Jasinda Wilder’s newsletter. This book called “Hammered” popped up and as soon as I started reading the description, I knew this book was what I needed to read. 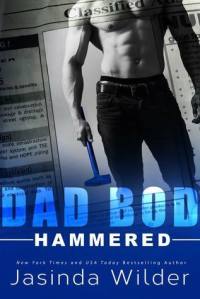 Dad Bod Contracting—for ALL your domestic contracting needs. Have a leaky faucet or clogged disposal? Need a new patio with intricate brickpaving designs? Want your garage transformed into a yoga studio? Dad Bod Contracting has you COVERED. Our clean, well-mannered, and friendly professionals pride themselves on attention to detail. Every job comes with a 100% customer SATISFACTION guarantee. No job is too small. Hand us your “honey-do” list and we’ll get it done, and we’ll look good doing it! A good job well done is one phone call away, so call Dad Bod Contracting today!

It started with a window that was jammed shut. Pretty simple, right? All I wanted was to open the windows while I tidied the house. I’d been after my no-good husband to do it for months, but he never did. And then he shacked up with his secretary, leaving me with a pile of bills, husband-free for the first time in ten years, and with a house that was falling apart.

The ad popped up on the side of my social media feed—a local contracting agency willing to do pretty much anything. Since I don’t really know a screwdriver from a ratchet, I gave them a call.

And let me tell you, the ad was NOT lying. Jesse O’Neill can do it ALL…and looks amazing doing it.

He fixed my window, so I called him back to fix the sagging, splintery front steps. Which led to him fixing my kitchen sink. And then he recarpeted my stairs. And then fixed the squeak in my bed.

He was supposed to fix my house, not my rusty, sputtering libido. And certainly not my broken heart.

Series: Dad Bod Contracting, #1 (though can be read as a stand-alone)
Age: 18 years and up
Review: 4.5 stars
Imogen’s pretty recently divorced, though her relationship with her ex had been broken way before then. It’s affected her self-image and self-worth, so when a hot new man comes in her life, she thinks he’s out of her league. He starts showing interest in her, however, and things get hotter from there.

I loved Imogen. She’s realistic in that she doesn’t think she’s perfect, considering she’s not skinny. But she’s also got that bit of spark in her that makes her do some impulsive things. I love seeing a main character that isn’t perfect and has got flaws! Imogen has a lot of internal growth to do after her ex smushed her self-worth into the ground. I love how Jesse is there to help her with all of that.

Jesse is hot! While he definitely doesn’t have a “dad bod,” as the title seems to suggest, I didn’t mind too much. He’s got a six pack and tattoos and long hair—but he isn’t a guy who walks all over girls either. He’s sensitive and listens to Imogen, and loves doing things for her out of the blue. He’s also insecure in certain things—he tells Imogen he’s surprised she didn’t judge him for the tattoos. (SPOILER – highlight to read I absolutely LOVED how he didn’t take advantage of her while she was drunk and instead walked home to let her sleep.) And when Jesse and Imogen finally get together, I loved how they were able to communicate (after a few bumps) and resolve a lot of the misconceptions between them.

While I loved the fact that Imogen wasn’t super skinny, I do wish there had been more acceptance of herself in this book. Her inner monologue was full of “I wish I were thinner” comments, which are realistic of the struggles we as women face, but I wish she had taken a bit more “I’m fine the way I am” stance towards the end, to show growth. I know she’s not going to think she’s perfect like Jesse does, but it would’ve been a nice message to those of us who don’t fit the hourglass, skinny model shape that the media likes to portray.

Audra was an awesome friend. While she’s super supportive of Imogen, she’s ready to call her out when she’s screwed up. That’s the sign of a true friend. I’m really looking forward to her story.

This was a fun read after reading quite a bit of heavy stuff, and while it’s not all totally realistic (SPOILER – highlight to read *cough* giving her multiple orgasms before coming himself even though he said he was close *cough*) that’s kind of the fun of it! I recommend this book to people who are looking for a fun, hot read that has you squirming at the edge of your seat and making sure no one’s reading over your shoulder.