Welcome to the Blessing of Luna book blitz! This book was published April 20, 2018!

Blessing of Luna by Blaise Ramsay 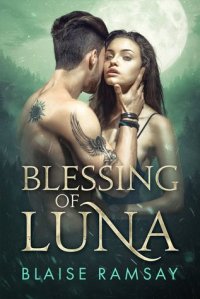 Lonely. That’s how it felt when Damien Pierce returned to Big Timber, Montana. It had been his childhood home until the day he was hit by a speeding car only to learn hewasn’t badly hurt. The experience landed him the label of the town freakshow.

Following the death of his foster mom, Damien soon disconnected from the world around him. That was at least, until he met her. She looked human but something about made her appear otherworldly to him. He knew he shouldn’t but he wanted her. He would do anything to get to know her. To have her.

Jillian Styles was immortal. Cursed by a dark god never to find rest. A shifter capable of taking the form of a beautiful wolf. She had searched for her lover’s reincarnated soul for centuries only to find he was nowhere to be found. When she meets Damien, her world is turned upside down. She falls in love with him instantly and begins to pursue him.

However, Damien soon learns the darker part of Jill’s world. He finds himself on the hit list of the same vampire Lord responsible for killing Jill’s lover and reigniting the flames of an old war. His daughter desires Damien and vows to have him at any cost.

With the help of Alexander Kain, the mysterious wolf shifting soldier, Damien will learn what he thought he knew was only tip of the paranormal iceberg. He soon finds himself in the eyes of a vindictive and rage-filled dark god.

If you like hot lycanthrope guys, overly possessive vampire chicks, vindictive gods, strong female leads and some hot sex scenes, this book is for you.

Kain led Damien to his tent. “Forgive my intrusion on your time with Jillian. I wanted to tell you one last thing before the fight. Holt nearly mentioned it in the meeting but I stopped him because it wasn’t the time or the place.”

“What is it?” Damien replied, curious.

“The dark secret of the vampire noble. As it is with us, the vampire nobles and high class have the ability to change into more powerful forms. Unlike lycans however, they only have a single transformation. I have only seen it once in my many years but it is very formidable.”

Kain pulled a box out from under a pile of old books and blankets. It was covered in dust as though Kain had been trying to bury the memory.
Laying it down before Damien, he opened it, revealing what looked like a talon.

“Kain, what is this?” Damien took it in his hands, carefully examining the detail.

“It was pulled out of my father’s side. When he returned, his body was dripping blood, his side ripped open,” Kain lowered his head. “Damien, he was in his full lycan form. Whatever left this has power. I want you to be very, very careful. Lilith most likely has the power to become the monster much like the one that left this talon.”

Damien’s breath stalled in his lungs. From what he learned about their history, Pentacost Kain was one of strongest lycan soldiers in the war.

To hear he was torn apart so badly in full lycan form by something that Lilith could possibly become sucked any hope Damien had of having a chance against her out of him.

“Kain, I can’t fight her. What if I’m not strong enough.” Damien raced in his chest as fear fought to take hold of him.

Kain took the talon, placing it back in the box. “Damien, you are more than strong enough. Lilith is inexperienced and most likely whatever it was that took down my father was much more powerful. I just wanted you to be aware of her ability. I will be by your side against her. Gabriel and I have already talked about it. Holt, Yuna, Galeck and Lune agree it’s the best course of action. Just be ready.”

Damien nodded, his words freezing in his throat.

“Good. The moon rises. I must hunt with Gabriel and Lune. Damien, if you need to, you may stay here tonight. I know Jillian does not yet understand how strong your bond with the gods is. It may help to be in the company of someone that does. For now, though, I believe I interrupted something between the two of you. Hell hath no fury and all that.” Kain walked out chuckling.

FyreSyde Publishing owner and founder Blaise Ramsay worked over fifteen years in the graphic design industry, with some experience in indie gaming. Recently she shifted her attention to the world of literature with her debut paranormal romance series, Wolf gods. The debut title, Blessing of Luna is set to release in 2018. She currently lives in North Texas with her two children, her husband and pets. A UTD graduate with a Bachelor’s in History with an intention on teaching, Blaise decided that the world of teaching just wasn’t for her. A stay at home mother of two, business owner and self-publisher, Blaise loves to meet new people and encourage others to follow their dreams through weekly posts to her instagram, twitter, facebook and blog.
Website * Goodreads * Facebook * Twitter