As I recover from binge-reading this book, a few words circle around in my brain: this book was amazing. Not only does it have magic, complex characters, and a cause many of us can relate to, but it also has amazing world-building and a plot that will pull at your heartstrings.

Children of Blood and Bone by Tomi Adeyemi 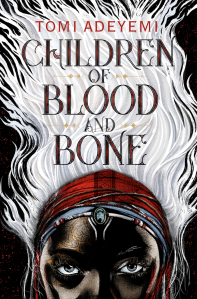 They killed my mother.

They took our magic.

They tried to bury us.

But everything changed the night magic disappeared. Under the orders of a ruthless king, maji were killed, leaving Zélie without a mother and her people without hope.

Now Zélie has one chance to bring back magic and strike against the monarchy. With the help of a rogue princess, Zélie must outwit and outrun the crown prince, who is hell-bent on eradicating magic for good.

Danger lurks in Orïsha, where snow leoponaires prowl and vengeful spirits wait in the waters. Yet the greatest danger may be Zélie herself as she struggles to control her powers—and her growing feelings for an enemy.

Series: Legacy of Orïsha, #1
Age: 13 years and up
Review: 5 butterflies
A quick summary of the world: Orïsha is a country where magic used to roam. The kosidán, those without magic, were afraid of the maji’s power, and as such waged war against them. But as long as the maji had power, they were able to keep the kosidán at bay. Until Saran, a zealous king, figured out a way to break off the connection the maji had with the gods. Then Saran ordered all of the maji killed—sparing the ibawi (those who cannot yet do magic but will be able to once they turn 13) since they were not trained in the ways of magic.

This is where the story comes in. It’s been eleven years since magic disappeared from the world, and Zélie is treated like a maggot—a derogatory term for Divîners, those who were born with white hair and the ability to do magic (although magic no longer exists). She gets thrown into a quest to bring magic back, but is almost thwarted at every turn by the king’s forces.

Zélie is everything I want in a protagonist. She’s stubborn, smart, empathetic, and has got flaws. Adeyemi’s writing makes her such a relatable character, with a backstory that drives her to succeed in her mission. I love getting to know her and I love that she’s not perfect. There are a lot of books out there where the hero is always right and never really doubts themselves and Zélie isn’t like that. She reads like a human being, with real inner and outer struggles. She’s lost so much and that makes her even more compassionate towards others. She doesn’t hesitate to fight for those who cannot fight for themselves and it’s that strength and stubbornness that gets her into trouble, but also makes her a kind soul. She’s also super quick with her comebacks and a little snarky, which adds some lightness that is needed.

Zélie isn’t the only one with a backstory. The main antagonist, Inan, isn’t pure evil. Because of the rotating POVs, we get to see his struggle—his inner monologue—and we get to, while not relate, at least understand why he’s making the choices he’s making. I am not one for the “pure evil” villain, and Inan is certainly not one of those. While I don’t always agree with Inan’s choices, I can’t truly hate him because I see what drives him. His intentions are mostly pure, and he does care about his people. He just tries to protect them in a way that ends up hurting most of his people. (His dad, Saran, doesn’t seem to care for the Divîners at all and doesn’t hesitate to hurt anyone with magical abilities).

I absolutely loved seeing Amari grow. While I didn’t really feel a connection with her in the beginning, the way she grew into herself made me smile and really proud. I loved it when she chose to stay and fight for what she believed right, even if it meant going against her family. Towards the end we got to see more of her and a little bit more of how she stepped up into her role as an active fighter against injustice. While in the beginning a lot of her choices were made in the heat of the moment, we see her own up to her choices and choose to stay in the fight to get magic back. There’s a scene towards the end where she helps Zélie through a traumatic event, and it makes me really happy that she took her experiences and turned them into a way she could help Zélie heal. Amari and Zélie’s friendship is my favorite relationship in this book because while they didn’t start out as friends, they bonded because of their experiences and were able to truly understand each other.

Zélie’s brother, Tzain, is the only one of the four main characters that doesn’t have a POV in the story. But even so, I really enjoyed reading scenes with him in it. He’s compassionate and really cares for his sister, and will do anything to protect her, even if it means getting the aftermath of his sister’s choices. His role is the protector in the book, and it’s hard for him to do what he wants because he’s driven by his need to take care of his family. His relationship with Zélie is most definitely a sibling relationship, because even though they fight, they are still willing to die for each other.

(And I can’t forget Nailah—Zélie’s Lionaire! I loved that animal!)

Adeyemi’s world-building was off-the-charts amazing. Her world’s mythology—influenced by Yoruba culture—was beautiful and I truly loved the stories of how magic came to be. Her writing sucked me in and had me flipping the pages to find out what happened. The plot is so smooth and a lot of people aren’t merely good or evil. Most of the time you can see why certain characters acted the way they did, and it’s that writing that made me love the book.

Adeyemi’s book is absolutely beautiful and I recommend it to people who love good world-building, magic, coming-of-age stories, and complex characters. This book not only has amazing writing, but it’s got fully fleshed-out characters that you can relate to.