Welcome to The Shadow Weave book blitz! This book was published January 12, 2018.

The Shadow Weave by Annette Marie 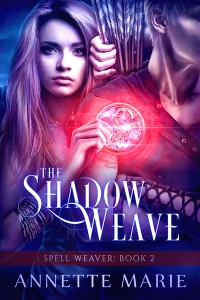 Clio might be a nymph living in exile among humans. And she might possess the rare ability to mimic any magic she sees. And she might have just seriously ticked off the most powerful family of spell weavers in the Underworld.

But she is not in love with an incubus.

Lyre is the rebellious black sheep of said weaver family, and he’s the only reason she survived her recent Underworld “vacation.” He’s also the sexiest thing she’s ever seen. Together, they have to track down a catastrophically dangerous magic—a magic he created, she sort of stole, and they both lost—before his family gets their hands on it. And that means fighting alongside him in a desperate attempt to avert complete disaster.

But she is definitely not in love with him. At least, she’s pretty sure she’s not.

Mostly sure. Maybe sure? …Crap.

As though summoned by her thoughts, the sex fiend himself breezed into the room. Hair damp and tousled, the kind of face that made women’s hearts skip, broad shoulders that tapered to a toned torso. His tattered clothes should have ruined the look, but they added an extra edge—dangerous and exotic.

The others in the kitchen noticed his arrival, but they dismissed him just as quickly. Unlike most daemons, incubi were easy to recognize even in glamour. No other caste possessed that stunning combination of golds—white-gold hair, warm golden skin, vibrant irises like a dark patina over rich yellow gold.

Yes, they recognized him as an incubus—and they didn’t bother to hide their curling lips and wrinkling noses. Lyre either didn’t notice or didn’t care as he swept over to her, his expression brightening for the first time in two days.

“Clio,” he purred, voice too low for even keen-eared strangers to hear, “your powers of seduction would put any succubus to shame.”

She blinked at him, the bowl of whisked eggs in her hands and a hot pan sizzling in front of her. His mood was so different from earlier that she couldn’t quite grasp it.

“Huh?” she managed. How articulate.

“This is entirely unfair. I have no power to resist such tactics.” He waited a beat. “Are you planning to do something with those eggs?”

She blinked again, trying to unscramble her brain. Scramble. Right, the eggs. She dumped the mixture into the hot pan. “What are you going on about, Lyre?”

“Bacon,” he sighed dreamily. “Pancakes. Scrambled eggs. You slay me, my love.”

On the words “my love,” her heart screeched to a stop so fast it might have left skid marks on her ribs. It kicked back into gear at three times its previous speed and she concentrated so hard on the spatula that she almost went cross-eyed. “You—you can’t be that excited about my cooking. You don’t even know if it’s any good.”

“I can tell already. It’ll be delicious.”

She shivered. The way he said that word should be illegal. As she hurriedly stirred the eggs with a spatula, he stood so close he was almost touching her, his body angled toward her as though she held his entire attention. But his gaze, sliding coolly from one watching daemon to another, was distinctly unfriendly.

She scraped the eggs off the pan, then rescued the bacon from the oven—triggering a stir among the waiting daemons. With her bottom lip caught between her teeth, she pulled a plate from the cupboard, loaded it with food, and held it out to Lyre. She’d cooked an elaborate late-night breakfast to cheer him up, but now second thoughts were crowding her brain. Too late to change her plan now.

His smile only fueled her blush as he fished a fork out of a nearby drawer, loaded it with eggs, and scooped them into his mouth. She held her breath. The entire room went silent.

His eyes rolled back in ecstasy. “So good,” he moaned.

She jerked around. The female daemon had dropped her heavy book on the floor. As everyone looked over at her, pink tinged the woman’s cheeks. She snatched up her book and beat a hasty retreat out of the room.

Clio swallowed hard, envious of the woman’s ability to flee. Lyre’s moan had been so sensual it had been downright scandalous, and if Clio didn’t put space between them soon, she was going to start swooning like a complete fool. 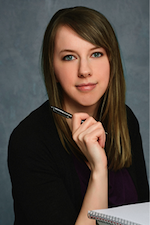 Annette Marie is the author of the Amazon best-selling Steel & Stone series, which includes Goodreads Choice Award nominee Yield the Night, and fantasy trilogy Red Winter. Her first love is fantasy, but fast-paced adventures and tantalizing forbidden romances are her guilty pleasures. She lives in the frozen winter wasteland of Alberta, Canada (okay, it’s not quite that bad) with her comparatively sensible husband and their furry minion of darkness—sorry, cat— Caesar. When not writing, she can be found elbow-deep in one art project or another while blissfully ignoring all adult responsibilities.
Website * Goodreads * Facebook * Twitter